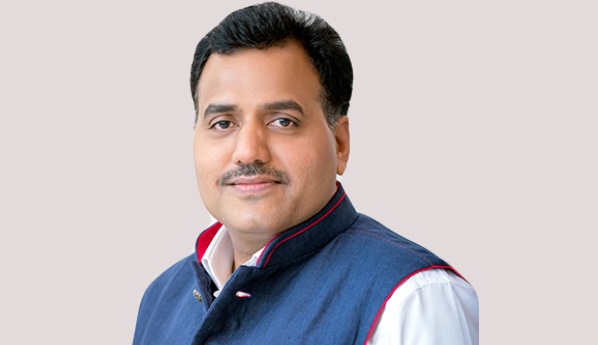 Jaipur. Envisioning always big in life, Mr. Anup K Kumar has made a concrete name of repute today as a Founder & CEO of Kirana King. His humble beginning, with education in the commerce background saw its evolution through his versatile experiences since 1996. As a passionate entrepreneur, he has found innovative ways of doing business.

Working with various companies, his long-awaited brainchild business concept of Empowering Grocery Retail saw its inception with his pioneering venture, Kirana King. Re-conceptualizing and redefining grocery business, ‘Kirana King – India Ki Nayi Dukaan,’ is taking the unorganized grocery retail sector by a storm. Giving a real, measurable facelift value for the traditional Kirana shops, he commenced with his ambitious project of Kirana King which aims at providing long-term benefits to everyone in the grocery retail ecosystem.

His consummate experiences gave him the insights to do business as it deserves to be. Today, he takes great pride in formulating indisputable ideas of bringing in complete transparency and germinating trust in the off-line grocery retail market of India. As a man of fine principles, his dedication does not limit itself in empowering the kiranawallas only but also goes to greater lengths in the form of his benevolent contributions to society and the environment.

For turning dreams into reality, one can go to any lengths. At least, Anup did that when he landed in Dubai in 1998. With a reference from his cousin in Delhi, he got an operations job in an agri-commodity trading company. A few months into the job, his role was upgraded to an accountant’s profile. The generous attention of the owner was not lost on him. He showed his loyalty by still doing general works like opening the office, dealing with walk-in African customers, meeting with suppliers as his extended responsibility.

“In fact, I was on a visit visa but started working there. Seeing my desperation to stay and work in Dubai, the owner of the agency took pains to arrange a work visa for me. That gesture motivated me so much that I managed everything, from opening the shop to closing it and doing accounts to operations jobs. In the process I won his trust and was given financial responsibility to manage the day-to-day business. I was just 25 then, ‘’ recalls Anup.

He had gone to Dubai for two months but stayed close to two years. When he came back to India for a short vacation and got married, he was approached by another agri-commodity trading company from Delhi to work as a country head and run its Dubai operations.

“I used to help them in Dubai whenever they asked for it. When I was in India, they approached me to join them as country head and lead the Dubai business. It was big for my experience, and I settled for a remuneration that was five times more than what I was getting earlier,” says Anup.

During the four-year stint, Anup travelled to many countries. He came across another big trading group from India and joined them as partners in 2005. But the experience was fueling ambitions to start his own business. In 2009, he set up Ruchi International Trading LLC in Dubai. As his business expanded, he opened an office in Jaipur in 2012.

“As the India office increased my visits to the country, I thought of venturing into something new. In 2014, I started private labels of rice, poha, and other basic staples under Kirana King brand from Jaipur but faced resistance. Our products were good, and the packaging was catchy, but finding shelf space in stores became an issue. I saw many FMCG brands facing similar problems. That’s when I decided to build the Kirana King platform,” reminisces Anup.
A food and grocery retail aggregation platform, Kirana King connects food manufacturers, FMCG brands and retailers, creating a distribution ecosystem through hyper local channel partners. It provides market coverage, penetration, and shelf space, while driving demand. “Kirana King is a comprehensive tech-enabled Retail-as-a-Service (RaaS) solution provider,” he explains.

Anup understood that in retail, availability, and visibility matter. In supermarkets, people shop with their eyes. In kirana shops, one asks for products. That’s why, initially he focused on creating shelf spaces and developing the power to sell.

“Our strategy was to empower retailers by transforming their store outlook and space arrangements even though that meant we had to bear the cost. The whole idea is to empower all the value chain partners, be it retailers, distributors, FMCG brands through a robust technology platform. We are not eliminating anybody, but gaps and inefficiencies,” says Anup.

In 2019, Kirana King tweaked its supply chain by having distributors instead of directly dealing with the retailers as the exercise needed more human resources. Today, it has a network of more than 3,000 shops with 300 of them being Kirana King franchise outlets. Anup says in retail, there is no winner or loser. “There is scope for all in a vast country like ours. We are not just facilitating smooth distribution of established brands but offering emerging brands services like getting shelf space and visibility through activities like branding, packaging, and market activation at our channel stores,” says Anup.

In 2020, Kirana King raised Rs 7 crore from the Rajasthan Venture Capital Fund. After fine-tuning the business model and technology, it is now at an inflection point. “In the past seven years, we have built a brand name. From this year, we are focusing on expanding our store count. In the next three years, we expect to have a network of 1.5 lakh kirana stores in three-four states. Profitability will be in focus after a certain scale,” says Anup.
Private labels are another area of its focus. “We already have about 10-12 Kirana King brand products. The intent is to increase the numbers under different categories,” says Anup. He says to drive the next phase of growth, Kirana King is in talks with high net-worth investors to raise Rs 25-30 crore immediately and another Rs 70-80 crore in the current financial year.