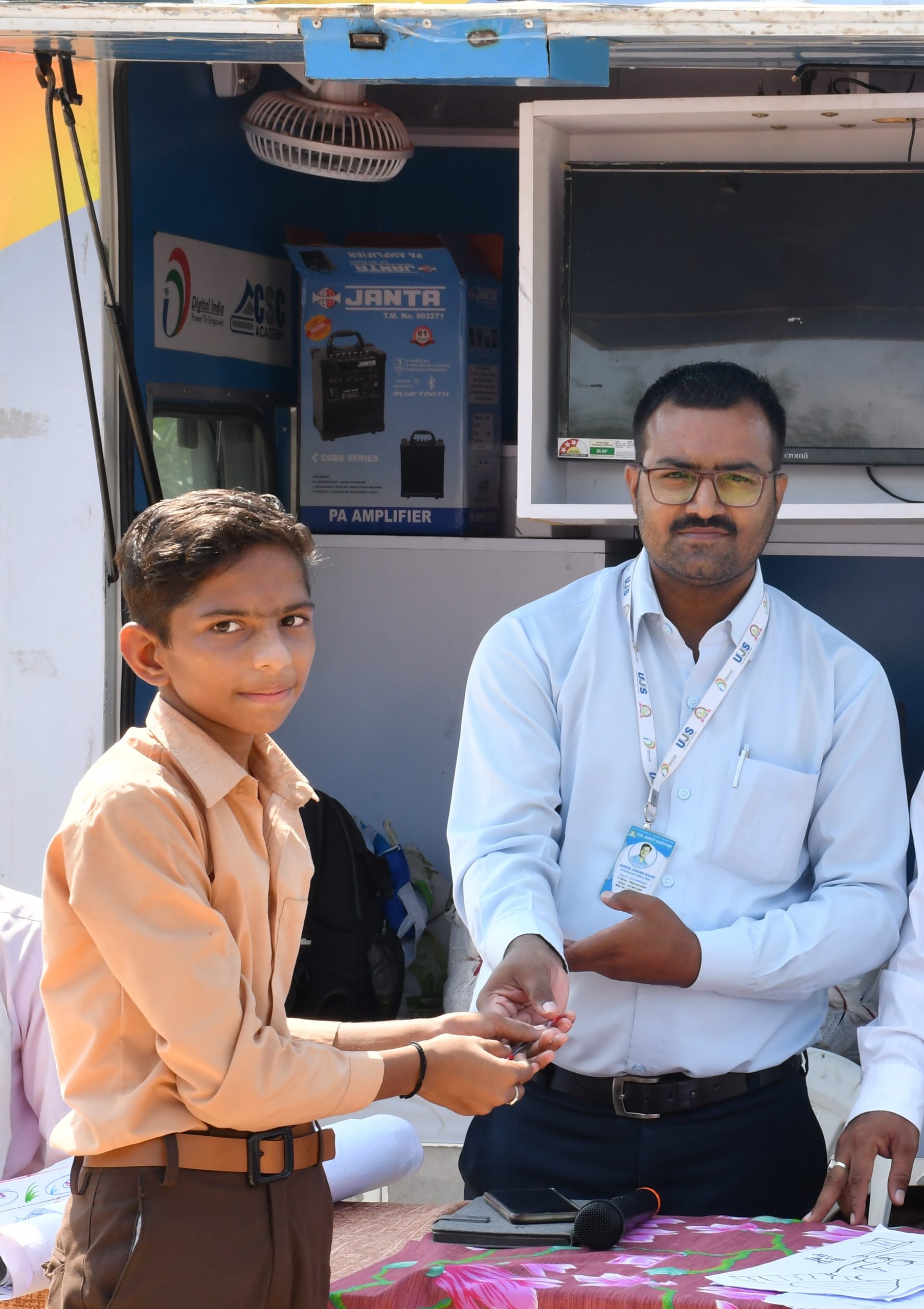 Alwar. 36 year old Gokul Chand Saini hails from Alwar District in Rajasthan. He holds a post-graduate diploma in Political Science and Geography, and has a Masters in Social Work (MSW). Saini started his career with a government job. However, he soon resigned from his job as he wanted to serve his community at the grassroots level. He joined CSC Academy, under the Ministry of Electronics and IT (MeitY), in the year 2015, where he learnt about their various programs focused on digital and financial literacy. Saini found the right platform to pursue his passion and registered as CSC’ Village Level Entrepreneur (VLE). After undergoing training, he undertook his first project to conduct digital financial literacy programs for the women’s self-help groups surrounding the Bansur town of Alwar.

Challenges Faced
On his visits to villages, he realized that villagers, particularly women, faced increasing financial challenges and had no understanding of money management. He heard stories of women who borrowed money from money lenders to educate their children and make their ends meet. Many faced threats and humiliation when they failed to repay the money on time. However, Saini was undeterred by the challenge set before him. He was determined to make remote villages financially literate.

Financial Literacy with ‘JaaduGinniKa’
Over the last seven years of his journey as a VLE, Saini, through Vodafone Idea’s ‘JaaduGinniKa’ program, focused on financial literacy and spread awareness on the need of financial management. ‘JaaduGinniKa’, which is implemented in partnership with Learning Links Foundation, educates people on basic financial concepts such as investments, financial planning, digital financial tools, etc. The content offered is based on simple storytelling format and features engaging games and quizzes. According to Saini, “The ‘JaaduGinniKa’ program has helped empower women.” Today over 5220 women of the neighboring villages have come together and formed a self-help group. Together they have a savings of approximately four crores. Saini’ project of digital financial literacy gained momentum when he was selected to operate the technologically equipped mobile van recently launched by Vodafone Idea Foundation, under its ‘JaaduGinniKa’ program. The mobile van is fitted with laptops, an LCD screen, speakers, and generator. It allows Saini to communicate the message of financial literacy in remote villages using audio and visual content. The mobile van also doubles as a classroom as villagers are encouraged to step inside and use the laptops to attempt interesting quizzes on financial literacy.

Impact on Ground
The ‘JaaduGinniKa’ program has enabled Saini to visit over 148 villages and educate over 1.25 lakh
youngsters on financial literacy. He has also trained over 140 women from remote villages and made them financially literate. Today, these women are VLEs themselves. They help villagers open zero balance bank accounts, and apply for insurance and investments. They also help villagers with cashless transactions. Saini also repurposed the mobile van to conduct COVID awareness drives, distribute masks and sanitizers, during the onset of the COVID pandemic. The mobile van was also used to deliver dry ration to families in need. When recalling his efforts as a VLE, the contentment in Saini’ voice cannot be missed. He says, “My aspiration is to help transform India at the grassroots level.”