NK Chaudhary : The Gandhi of the Carpet Industry 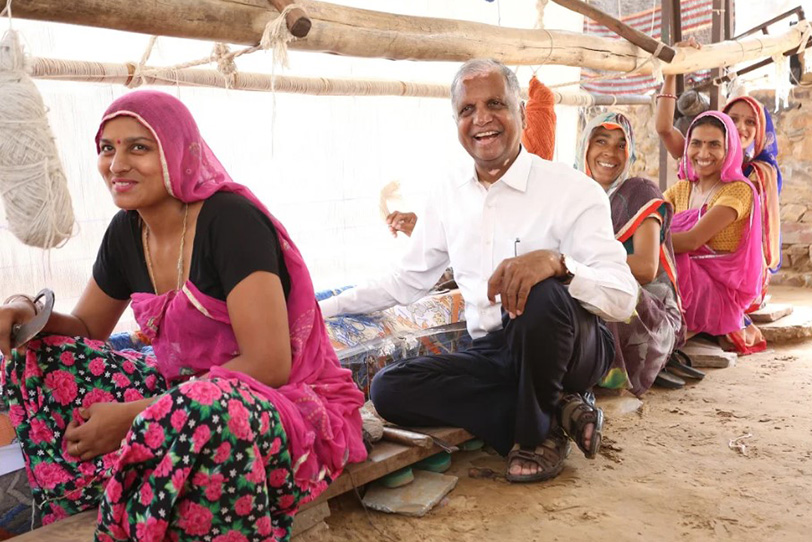 Jaipur. Nand Kishore Chaudhary founded the idea of Jaipur Rugs in 1978, working beside nine artisans on two looms. He started his business on the principles of dignity. Today, he is the entrepreneur behind the one of the largest manufacturers of hand-knotted rugs and is often referred to as the ‘Gandhi of the Carpet Industry’. Raised in a traditional family in Churu, Rajasthan, NK Chaudhary took a loan from his father after college to buy a bicycle and some raw material to set up two looms for nine artisans in Churu. The first carpets were identical twins of 24 square meters and were exported under the name ‘Bharat Carpet Enterprise’. NK Chaudhary’s greatest achievement was subverting century old practices that shunned women, artists and the poor. In the company’s early days, he removed middlemen to connect directly with tribal artisans. He treated them with dignity, empathy and respect who were considered untouchables. Today, NK Chaudhary is a widely celebrated social entrepreneur. His incredible life story stands as an example of how profit and kindness can go together in business.

After graduation, NK Chaudhary was selected for a cashier’s job in the United Bank of India. He declined by writing a polite letter and then joined the family branded shoes business in Churu. But three years later, he got disillusioned. He turned to himself and ran a search. “I gave it a hard thought to understand who I am and what my passion is. I listened to my inner voice, and then realised that I am people-person. I want to be among people and go to villages where very few go. Having been convinced of what I would like to do, I looked for opportunities,” recalls Chaudhary.

Soon, he discovered that there is a good demand for carpets in export markets. It would also take him where he wanted to go, villages and people. Family members and many in the village scoffed at his idea of leaving an established business for something so uncertain. But the upright and in-your-face man, which is hidden behind his demure demeanor, took the plunge, disregarding family opposition. “I took Rs 5,000 from my father and started with two looms in our house in 1981. Initially, I supplied to exporters, doing job works. As I had a passion for people, more and more joined me,” reminiscences Chaudhary. The business grew to a size of recognition over a decade. That’s when he decided to start his own exports by relocating to Jaipur. “By 1991, I had become well-known for quality and volume. When I opened my Jaipur Rugs office in C-Scheme, it was not difficult to find buying agents. I started with Germany and then went on to other countries. In a few years, I found myself exporting to 7-8 countries including the US and the UK,” says Chaudhary.

Today, Jaipur Rugs exports to over 60 countries, clocking revenues of Rs 230 crore (last year) and engaging 20,000 weavers and spinners in 400 villages. Chaudhary says the demand is pretty good and they are expecting a growth of 30% in the current year, fuelled by the domestic market demand. The maker of hand-knotted carpets entered the domestic market in 2016 which is currently contributing 20% to its revenues. “Our exports business is in fine fettle. Now, we want to focus on the fast-growing domestic retail market. We have opened offline stores in Jaipur, Delhi, Mumbai Bangalore, and a franchisee outlet in Hyderabad. We are planning to double the store count in the next three years taking experience from the existing ones. E-commerce is also emerging as a major driver,” says Chaudhary. Jaipur Rugs also has a store in Milan and another one is coming up in Dubai. Regarding the uniqueness of its products, Chaudhary says, “We do not sell carpets, we sell family blessings (artisans), experiences and stories. The superiority of our hand-knotted and hand-spun carpets owes to the immersive design and flawless quality made with the love of thousands of rural weavers and spinners,” says Chaudhary.

While Chaudhary has delegated the key operations of the company to his foreign educated children (two sons and three daughters), he says the priority is to professionalise the middle management. “While the key leadership roles will remain with the family, we want to professionalise the management for which we have hired a recruitment agency. Our value of love is so intrinsic that only my children would understand and preserve it. That’s why the top management will remain with the family,” says Chaudhary. While his eldest son heads the sales and marketing division, the second one looks after the supply chain in India. Jaipur Living, the US sister concern, is managed by his daughters Asha and Archana. Chaudhary says Kavita, his middle daughter, has earned a global reputation for her designs and aesthetics. Jaipur Rugs revolutionised the carpet industry by creating an entirely new business model – working directly with artisans and empowering them and their communities with sustainable livelihood opportunities. Chaudhary says the mission is to create artists out of artisans. “We have tied up with the British Council and Rajasthan Royal Foundation for a design lab to give exposure to weavers. Besides, we have been running programmes from time to time to instill aesthetic sense in artisans,” says Chaudhary.